Lordi - 2015
From Lanzarote to Germany

My wife Tatjana, my daughter Tarja, my son Erik and I, Nico, stayed the first time in Marina Rubicon in 2014. While strolling we noticed Freddy’s feeding stations. We decided to contact Freddy and looked after some of those stations during our holidays.

Because all of us really loved this place, we decided to come back in September 2015 together with my parents.
On the third evening Tatjana and I met Freddy and we joined him on his tour, while my parents looked after the children.
When we reached the feeding station located between the old tower and Volcan, we suddenly saw a small black and white cat, maybe 5 months old. Freddy was really surprised. He had never seen that cat before and it was really tame.

Freddy knew that this young kitten had to be neutered as soon as possible. He asked us to keep the cat's attention so that he could run to his car and get a crate.  Luckily, Tatjana needed only a few moments to gain the cat’s trust and we managed to get him in the car.

We suddendly felt kind of reponsible for that cat we named Lordi and decided to sponsor his neutering.  Later we also adopted him and he is now living happily with us in Germany. 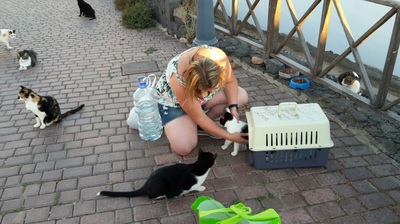 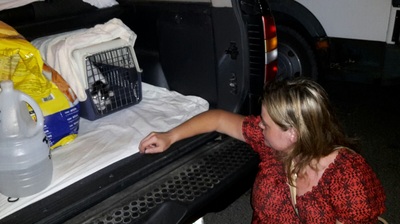 After the surgery and another day of recovery, Freddy and us abandoned Lordi at the Rubimar-bridge. It was very hard, because the little boy did not want to disappear. At that point Tatjana and I realized that we already became fond of the cat and bothered if we would see him again, because he really looked lost to us. We decided to visit Lordi in the evening with Tarja and Erik, to see if Lordi consorts with little children. But neither in the evening nor in the next morning we could spot him.

A call from Freddy confirmed our worry: Lordi was found limping and with high temperature near the “Arte de Lava”-store. The vet diagnosed a sprain and a lack of body’s defenses. This showed us, that Lordi was an indoor-only cat, before he was abandoned by his former owners.
Next day we visited Lordi, who was at Freddy’s villa to recover, and ascertained that he really loves children. Now our mind was made up to adopt Lordi.
Because the pet’s vaccination certificate has to be older than three weeks, we could not take Lordi home with us. Freddy promised to settle all that is necessary and find someone to take our cat to Germany as soon as possible. The day before our holiday ended, we visited Freddy and Lordi a last time. For goodbye, our two years old son said: “I love you, Lordi.”
During the next weeks, Freddy sent us lots of pictures of Lordi. We and especially our children really enjoyed that. After three weeks came a message from Freddy, that a flight companion has been found, who can take Lordi to Germany next week. There was only a little fly in the ointment: We had to fetch Lordi by night at Hannover Airport, which is 250km away from us. But this could not discourage us.
At the airport we met Martina and Frank, who brought our little Lordi. On the way home Lordi was calm. When we opened the box at home, Lordi came out and eyed his new kingdom. He always interrupted his expedition by coming to us to get petted, curring all the time. 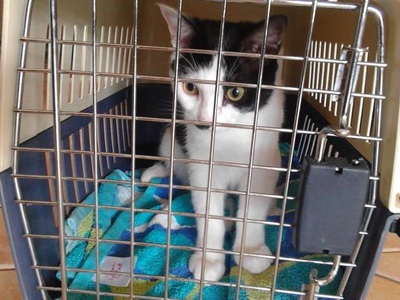 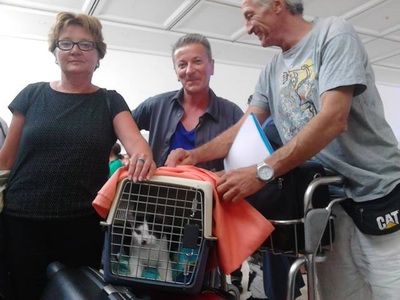 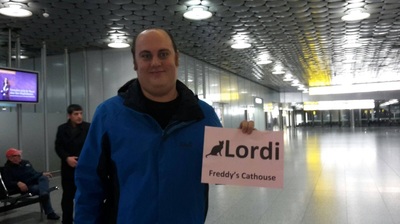 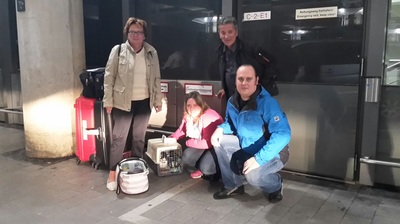 On the way home Lordi was calm. When we opened the box at home, Lordi came out and eyed his new kingdom. He always interrupted his expedition by coming to us to get petted, curring all the time.
Now our Lordi has settled down and feels comfortable with us and his new home. And we do as well, because we never would have guessed that a cat can be as straightforward as Lordi is.
We are endlessly thankful to Freddy and the flight companions Martina and Frank!