Pussy - May 2016
From Lanzarote to England

We are John and Jane and we live on England’s beautiful Sussex coast. We have been visiting the beautiful island of Lanzarote for several years, generally throughout February to escape the worst excesses of the British climate in winter. Having travelled all over the island, our favourite place is Playa Blanca, and it is there, in 2014, that we first made the acquaintance of ‘Pussy’. Pussy was just a regular small, grey and black striped tabby cat with a white front and four white paws. He lived at the Corbeta hotel on Avenida Pechegura and ran round in a ‘cat pack’ with three or four others. The hotel had a lot of stray cats, but the manager was unaware of Pussy’s existence. The cleaners shooed the cats away. A kind gardener fed them dry cat biscuits when he was on duty but otherwise the cats got food where they could from leftovers in bins and from kind guests who fed them. The cats were timid and thin.

It soon became obvious that Pussy was special. He was bolder than the other cats and used to come to our apartment and hang around in a hopeful sort of a way. We bought cat food and started feeding him. At first he didn’t know how to eat from a saucer and kept scooping the food off the plate with his paw and eating it from the ground. One particularly windy and chilly day, he came inside, promptly tore up a newspaper – why we don’t know - and proceeded to stay all day, sleeping in the bottom of the wardrobe on a pile of John’s abandoned clothes.

It wasn’t long before we were both in love with Pussy. He slept on our bed and shared our meals.  If we ate out, we ordered fish and saved a bit as a treat for Pussy. When we returned to our apartment, Pussy was always waiting for us on the doorstep, eager to know what we’d brought him. John went to the vet and spent a lot of money on flea and worm treatments. Pussy’s coat started to look better – and he became fatter. All too soon, however, our holiday came to an end and we packed our suitcases to go home. Pussy showed clearly that he knew we were leaving and sulked while the packing went on, then rushed away without a backward glance.

As the months went by at home in England, we found ourselves wondering about him. How was he getting on? Were other guests feeding him? Was he still alive? By June, we had returned to Lanzarote and we found him still there, still with his cat pack but by now thinner. He was unsure of us at first, but soon he returned to our apartment and the old feeding regime resumed. After a fortnight of Lanzarote sunshine we went home to summer rain. Pussy sulked when he saw the suitcases being packed and refused to leave the apartment. He hid under the bed. We couldn’t get him out, so we left the terrace door open. We guessed he would dash out when the maids came in.

We visited Pussy often: once in October that year and again in February, June and October 2015. The autumn holiday had been booked up at short notice, and we couldn’t get a room in Pussy’s hotel, so we had to stay down in the town in a much nicer hotel. We walked up to see him every day about 6pm in the evening and found him waiting for us. He couldn’t understand why we didn’t invite him into one of the Corbeta apartments. It was hard to say goodbye to him when we went back to our hotel.

Our last visit to the Corbeta hotel was in February 2016. We insisted on having an apartment near to where we knew his territory was, and it didn’t take long for Pussy to appear. He looked cold and thin and sad. Once more we encouraged him into our apartment, fed him, cared for him and restored him to good health. We noticed that the holiday bungalows were being renovated, but we thought nothing of it at the time. Once again, it was hard to say goodbye to little Pussy when we left in early March and he did his customary sulk when he saw us packing to fly home.

We’d been at home for a month and we were missing Pussy. We decided to book up another trip to Lanzarote for later that year and I tried to book it on the internet. Disaster!  The Corbeta Hotel was nowhere to be seen. What on earth had happened? As luck would have it, some friends were on holiday in Playa Blanca and I emailed them. They went up to the Corbeta and found it closed. No guests were there, just a skeleton staff, who said that the hotel had been bought by another chain and was being totally renovated. The manager told our friends that the hotel would be closed for eight months while the renovations took place. They asked about the cats. He said that they had been taken to a place of safety. They didn’t believe it and neither did we. So John and I had a couple of sleepless nights worrying about what had happened to all the cats, and in particular to darling little Pussy. In the end, John decided he was going to rescue Pussy if he could, so I booked him on the next available flight, found an Airbnb for him to stay and drove him up to Gatwick airport. The next day John walked up to the Corbeta but the manager wouldn’t let him in. He walked around the perimeter of the hotel and saw Pussy. He had climbed onto a low roof of one of the bungalows and was crouching there terrified of the building noise and the bulldozers which were demolishing his world. John couldn’t get to him.

That’s when wonderful Freddy and Michelle entered the story. We are members of Cats Protection in the UK and so looked for an equivalent organisation in Lanzarote who might be able to help us. We love reading the Lanzarote Gazette and in an old copy I found an article about Freddy and his cat feeding stations. It gave a phone number so I sent him a text and he replied. I felt that I had found a friend immediately. John made contact with Freddy and Michelle in Lanzarote. I can honestly say that without them nothing would have been achieved. Freddy and Michelle approached the hotel manager and spoke to him in his own language (German). Freddy was allowed into the hotel to look for Pussy. He saw a number of cats – they were all disturbed by the building activity and were all hungry, although some of the kind workmen were giving them food. But Pussy was nowhere to be seen. Eventually, after several days, he was spotted having climbed onto a roof. He wouldn’t come down. All this time, Freddy was setting a cat trap every evening and every morning finding a cat in it, but never Pussy. On the very last day Freddy was allowed into the hotel, Pussy was trapped. He made a big fuss, but settled down quickly when he went to stay at Freddy and Michelle’s house. They were marvellous: they took him to the vet’s where he had injections, a microchip and got a pet passport. Then they kept him at their house for three weeks before he could fly to Britain. Freddy and Michelle helped John achieve all this: he could never have managed to negotiate all this on his own.
Then John flew home. We kept in close touch with Freddy and Michelle and I arranged a flight for Pussy to the UK. Freddy and Michelle looked after him, made him comfortable and found a cat carrier for him to travel in. Three weeks later, we were very excited as we drove up to Gatwick airport to wait for Pussy’s flight.

At the airport we waited for the plane from Arrecife to arrive. There was a lady there waiting for her dachshund to come on the same plane. She said her husband had telephoned to say that, very unusually, a cat was on the flight. We were relieved to hear it, as we knew who that was! Just then we heard a ‘miaow’ and we knew that Pussy had arrived. The gates opened and he came out in a large carrier looking very scared. We took him straight to our car.  He seemed very nervous but soon settled quietly for the journey home.
The rest is history. Here he is in his cat carrier on his way home. 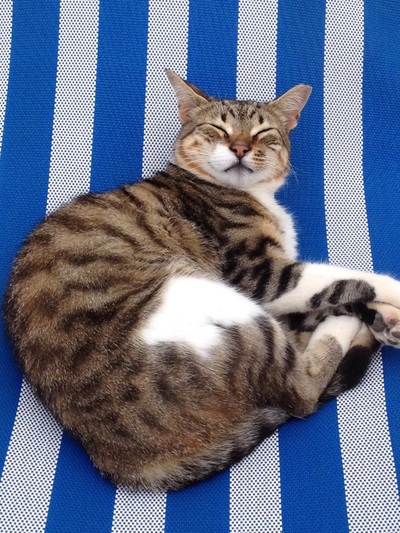 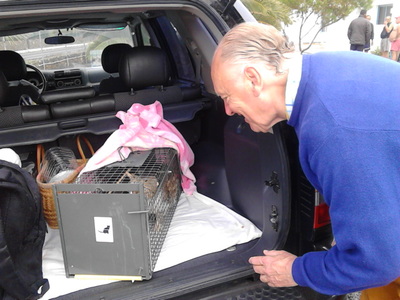 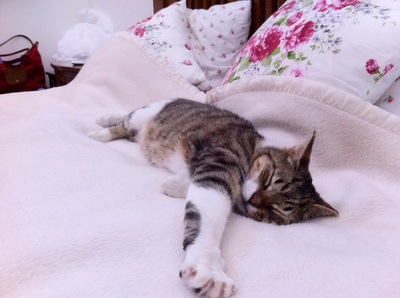 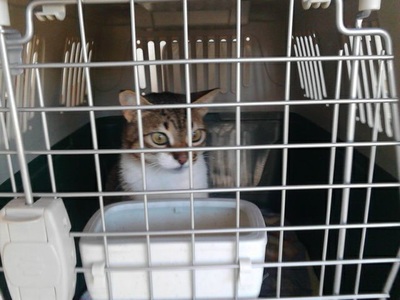 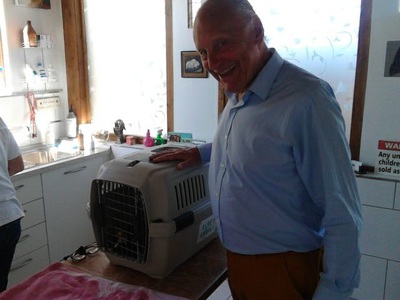 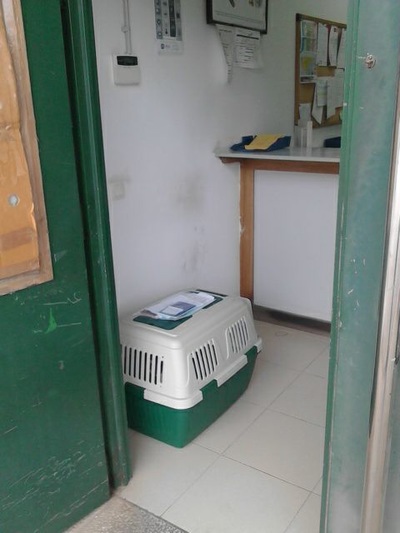